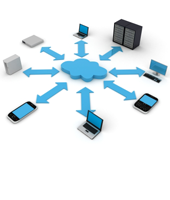 Internet T1/Bonded T1 - T1 is a Dedicated Internet Access circuit for connectivity to the internet made up of 24 channels.  Each channel is made up of 64 kbit/second that work simultaneously to reach speeds of 1.544mbit/second.  Internet T1s can be bonded (sometimes refered to as NXT1) to each other and bonded up to 12mbps in increments of 1.5mbps.  However, if you need 3 T1s at 4.5mbps, you may be better off ordering an Ethernet Circuit.

Voice T1 - A voice T1 can be set up just like an internet T1, but with voice instead of data.  You can also set up voice T1s as PRI (Primary Rate Interface) which allows users to have up to 24 telephone lines and simultaneous conversations, but also allows several DID (Direct in Dial) numbers.  For example, you could get 24 telephone lines but have seveal hundred DID numbers.

Integrated T1 - An integrated T1 encompasses the best of both world from the voice T1 and from the Data T1.  Each 64 kbit/s channel can dynamically convert back and forth from voice to data and vise versa.  Voice always takes precedent over data on an integrated T1.  Direct in Dial numbers can also be set up on integrated T1s.

VOIP (Voice over Internet Protocal) - VOIP is a way of communication voice traffic over you internet service instead of using the PSTN carrier networks.  VOIP is less regulated compared to traditional copper voice traffic and can save companies substancially.  Today with QOS (Quality of Service) and COS (Class of Services), carriers can guarantee better quality VOIP traffic with less degridation and static on the lines.

SIP (Session Initiated Protocal) - SIP works in conjunction with several other protocols and is only involved in the signaling portion of a communication session.  When looking for SIP services, it's important to find a carrier who has your phone system (PBX) on thier approved SIP PBX list. As our consultants if you are interested in SIP.

Ethernet - Ethernet is slowly becomming the T1 of 10 years ago.  Today, instead of buying an Internet T1 at 1.544mbps, companies are buying Ethernet circuits from 2mbit/s up to several gigs of bandwidth speed.  Some forms of Ethernet are:

MPLS (Multi Protocal Lable Switching) - is a circuit a in high performance telecommunications network which directs and carries data from one location to the next with the help of labels. MPLS makes it easy to create links between sites on a private intranet, allowing companies with multiple locations to communicate with each other privately with voice and data services.  The circuits are highly scalable and can increase a companies performance and ease of communicating and sharing data between sites.  A common application would be sharing a software license between sites instead of buying multiple software lisense to accommodate each location.

Point to Point T1 - A point to point is a form of T1 that sets up an internal network between two sites at 1.544mbps.  The circuit does not have any data internet access on it, and end users are responsible for formatting the communication on this line.  There are only two end point on a point to point T1 and there are only two speeds available wiht this circuit, 1.544mbps or 45mbps.  If you have three or more sites, most likely MPLS is going to be a better solution.

DS3 - Sometimes referred to as a T3, Digital signal 3 is the equvalent of 28 Internet T1s (DS1) working together.  The speeds can reach up to 45mbps but can also be set up on Fractional DS3 at anywhere from 10 to 45mbps.

Colocation - This allows you to rent space in a data center to store your equipment instead of having equipment onsite.  Great for dispersed work forces or a good disaster recover plan.